When Evil Is Called Good (Updated from original 2014 post)

I suppose it would not bother me so much if the tale of
Sleeping Beauty was not one of my favorite fairytales.
I clearly remember when I was a little girl growing
up in southern New Jersey and my grandmother taking
my sisters and me to see the beautiful tale of
Princess Aurora as retold through the wondrous
screen magic of Walt Disney's animated
1959 film,  "Sleeping Beauty".

My least favorite character of course was the
despicable evil fairy called Maleficent.

Created exclusively for the 1959 Disney film,
Maleficent, after feigning hurt for not being invited to
Princess Aurora's christening, then proceeds to put
a terrible curse on the innocent baby princess,
claiming that when she turns sixteen years old,
she will prick her finger on the needle of a
spinning wheel and die.
After she departs the grand reception hall in a swirl
of glowing green vapor, Aurora's stunned and frightened
parents are relieved when they discover that one of
the three fairy godmothers, pleasingly plump,
bluer than a bluebell Merryweather, has yet to
bestow her blessing on the sleeping child.
While Merryweather can not fully undo the
wicked fairy's curse, she grants that Aurora
will not die, but that she will fall into a
deep sleep, and will be awakened only
by true love's first kiss.

Throughout the movie, Maleficent tries
to destroy the innocent and beautiful
Princess Aurora, but in the end, her wickedness
is soundly defeated after gallant
Prince Phillip impales her black dragon heart
with a sword blessed by the magic
of the three fairy godmothers.
He then returns to the palace where Beauty
lies in deep sleep and bestows the long awaited
first kiss of true love.
Princess Aurora awakens and finds
her dream man by her side... ...and they lived happily ever after!

Fast forward to the 2014 and the release of the
dark fantasy, "Maleficent".

In this recent re-telling
of the classic tale, the title character is no
longer portrayed as evil, but as a wronged victim,
who, at the end of the film,
becomes the heroine of the story! 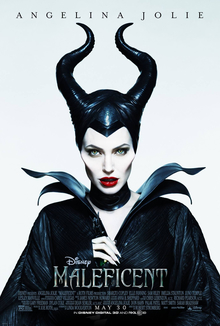 According to Wikipedia's synopsis:
"Soon after, Aurora is crowned queen
of the human and fairy realms by Maleficent,
unifying the two kingdoms,
with Phillip appearing at the coronation.
Maleficent returns to her role
as protector over the kingdoms."

"Maleficent returns to her role
as protector over the kingdoms?"

May be I seem to be
overreacting here just a bit,
but, I find this statement more than
a little disturbing to say the least.
I know someone reading this might think,
" What's the big deal?It's just a movie!"

While that is true, movies often have a powerful
effect on the minds of the many millions of people
around the world who watch them, and
especially on the impressionable and
innocent minds of children.
In the 1959 animated story,
Maleficent was portrayed as thoroughly
and intentionally evil,
hence her curious name, which is defined as,
"causing or capable of producing evil".

Cloaked in the powers of darkness,
Maleficent cursed the innocent baby
without a second thought of mercy or apology- unlike her
latest incarnation- which portrays her as a once noble
fairy who succumbed to the dark side after being
betrayed by Aurora's father, King Stefan. 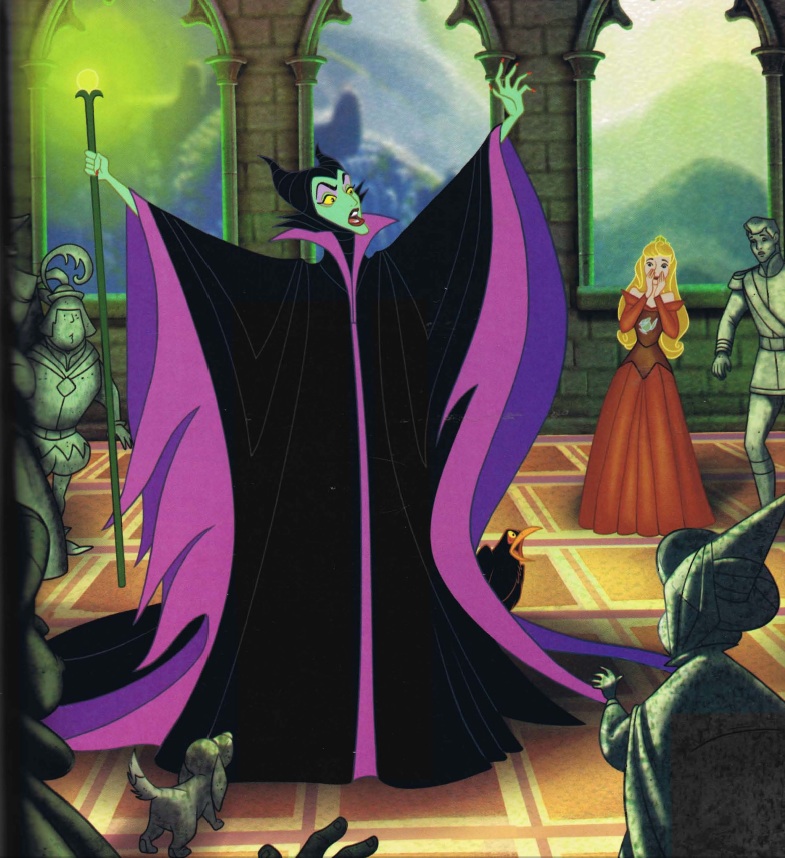 In the book,
"Battle Plan For Spiritual Warfare"
authors Joe Wasmond and Rich Miller
point out that Satan will use any
resource to confuse and deceive people
regarding supernatural forces of good and evil,
even through the seemingly harmless re-telling
of a classic fairytale.

"Demonic forces are hard at work trying to whisper lies
into our minds to distort our picture of God. They will use
any resource at their disposal, including false religions,
deceived people, ungodly media, -(including movies)-to
try and implant their lies into our thinking."
"Battle Plan For Spiritual Warfare"
Joe Wasmond and Rich Miller

"Woe to those who call evil good
and good evil, who put darkness for light
and light for darkness, who put bitter
for sweet and sweet for bitter!"
Isaiah 5:20

While the perceptions of what
is good and what is evil have become
increasingly skewered in the 21st century
technology-distracted world in which
we live in today, God never changes
and neither does His precious Word.

God's love for man is not based
on condition or circumstances.

He wants the best for people, if only they

choose to place their trust in Him.

This is why He sent Jesus. "And I will put enmity between you and the woman,
and between your offspring and her Offspring;
He will bruise and tread your head underfoot,
and you will lie in wait and bruise his His heel."
Genesis 3:15

Posted by Bluestocking Redneck at 11:06 AM No comments:

Hero Of My Soul

Hero of my soul
You left Your mark on me.
The way You lived Your life
Makes me want to be.

Undeserved mercy
The way that You loved her
When everyone else
had a rock in their hand
And wanted to kill her.

Posted by Bluestocking Redneck at 7:27 AM No comments:

No Greater Love Than This: Memorial Day 2016

Always remember...
Never forget...
America is only free...
because of her brave! In tears that now stream down my upturned face
As our flag waves above you, in her glory and grace.
Freedom was a gift that you unselfishly gave
Pain and death was the price you ultimately paid.
Every day, I give my utmost admiration
To those who had fought to defend our nation.
"In Your Honor"
-Author Unknown

"The citizens of democratic countries
in this world enjoy their political freedom
because fathers and mothers have sacrificed
their sons and daughters.
Most would have gone in their place
if they could have.
Citizens of heaven likewise enjoy their
spiritual freedom because our heavenly Father
sacrificed His only begotten Son
so that we may live a liberated life
in Christ.
Freedom always costs somebody something-
and when the cause is just, the price
is always worth it."
-Neil T. Anderson
Founder and President Emeritus
of Freedom In Christ Ministries

To all our servicemen and women
whom have given the ultimate sacrifice
for this nation,
thank you for your service and for
the precious gift of freedom.

You are truly America's
greatest heroes.
May you rest in God's eternal peace.

“There is no greater love than this:
that a person would lay down his life
for the sake of his friends.”
John 15:13

Posted by Bluestocking Redneck at 4:40 PM No comments: The story is told of an old Scottish fisherman who
was having afternoon tea with some friends in a
little tearoom by the sea.
As he was describing some of his fishing exploits
of the day, his hand accidentally knocked over
his cup of tea.
An ugly brown tea stain appeared on the
freshly whitewashed wall beside him.
"Never mind about the stain," said a friend
as he rose from his chair and drew from his
pocket a brown crayon.
There emerged from that ugly brown tea stain
a magnificent stag with antlers spread and
back arched.
The friend of the fisherman was one of
England's most famous painters.
Life is full of ugly tea stains that splash
against whitewashed walls.
Reality often seems to be
more obstacle than opportunity,
more pain than pleasure,
more chaos than calm,
more hurt than happiness,
more tension than tenderness.
But, if I interpret
Romans 8:28 correctly,
I must believe that as God's woman,
God is using everything in my life
to make me more like Himself.
Together, He and I can
take the tea stains of my life
and make something out of them.
We can take the chaos and be calm,
take the tensions and be tender,
take the hurts and be content,
take the obstacles and
build opportunities.
That is what God offers me
from life.
And when God says that's what He can
do for me, only my unbelief keeps me
from experiencing it.
If the Christian life is
worth living, then God is worth believing.
And if I believe God,
there is no end to the possibilities.
-Ruth Senter

Believe not those who say
The upward path is smooth,
Lest thou should stumble in the way,
And faint before the truth.


It is the only road
Unto the realms of joy;
But he who seeks that blest abode
Must all his powers employ.


To labor and to love,
To pardon and endure,
To lift thy heart to God above,
And keep thy conscience pure.


Be this thy constant aim,
Thy hope, thy chief delight,
What matter who should whisper blame
Or who should scorn or slight.


What matters—if God approve,
And if within thy breast,
Thou feel the comfort of His love,
The earnest of His rest?
-Anne Bronte
(1848) 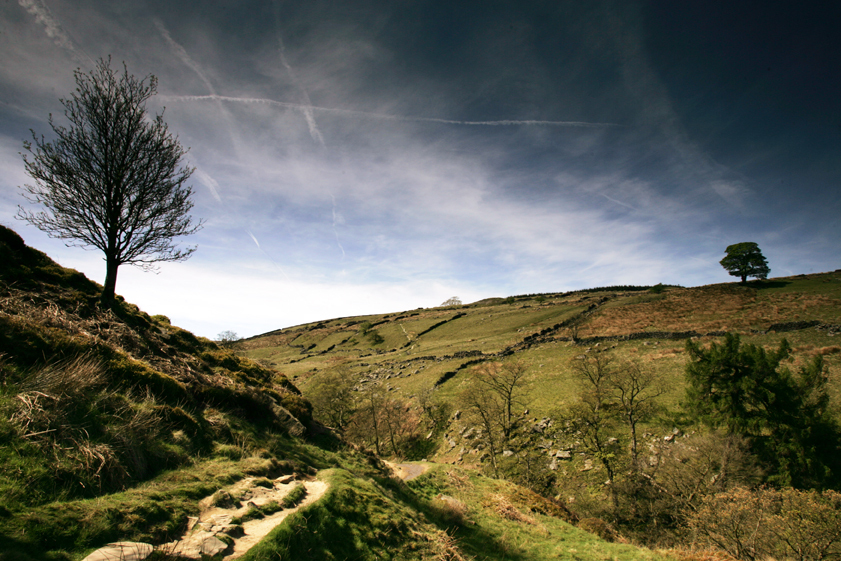 The beautiful, windswept English Moors of
the Bronte sisters childhood

Posted by Bluestocking Redneck at 3:13 PM No comments: